The cheeky smile is back on Finn Russell‘s face as he takes a seat in a meeting room of Racing 92’s training ground.

Keeping out of trouble? ‘Trying to!’ he says with a laugh. ‘It’s all good’. Having just collared the No 10 from the team dining room, the club’s head of media jovially adds that: ‘Everything is always good with Finn’.

What’s not to love about the Parisian life, after all? Their training ground has its own wine cellar, and there are restaurants on the doorstep that he ticks off one by one. The laid-back Scotsman is adored by local supporters, who cheer their Magicien as he performs acts of sorcery around The Defense Arena.

Laid-back Finn Russell is adored by Racing 92 supporters, who cheer his every act of sorcery 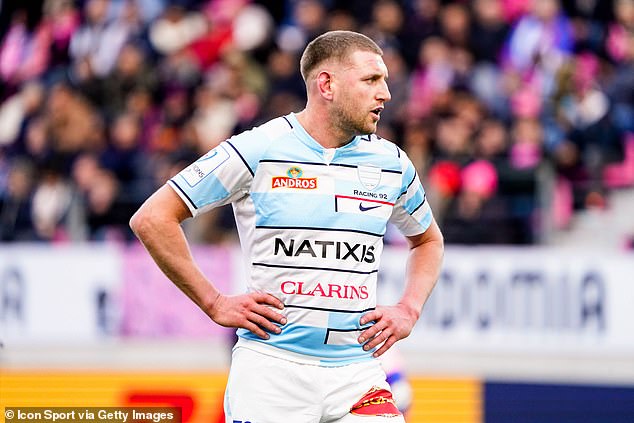 However, he has told Sportsmail that the last few months have been challenging for him

On the face of it, things could not be better. However, over the course of his lunch break, Russell openly admits that the last few months have been challenging. The conveyor belt of fixtures barely stopped after the Lions tour and the demands of the modern game weighed heavy.

‘This season there have been a few things that have run into each other, which probably caught up with me,’ he says. ‘On the mental side, I think I’ve been slightly drained. I probably didn’t get as much time off this year — maybe five days — so that’s probably had an effect on the way my season’s been.’

After Racing’s Champions Cup quarter-final against Stade last month, Russell made a bee-line from the stadium to the airport. He spent the week at Dubai’s Hotel Fairmont the Palm; the hotel of choice for the likes of Jennifer Lopez. It provided an opportunity to recharge and reflect on a Six Nations campaign that ended with scathing reviews and a rule-breaking trip to an Edinburgh nightclub. 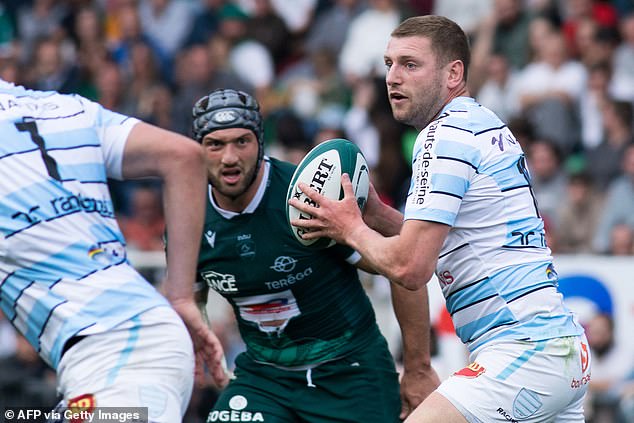 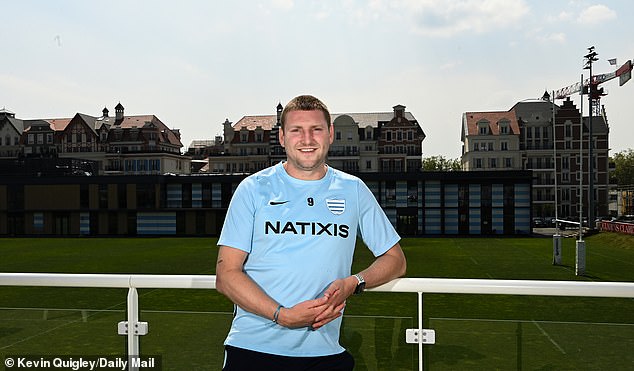 ‘To get some time away from it, to freshen up and not really think about rugby was probably the best thing for it,’ he explains. ‘Good beaches, good restaurants, good weather.

‘I probably found the Six Nations camp quite tough, for various reasons. My form’s been a little bit up and down. I’ve not managed to maintain that form. It could come down to the long season, things on the field, things off the field. The Lions tour is a massive high, the highest thing you can do in rugby, and then you come back to your club and it’s slightly different.

‘You have maybe three-and-half weeks off then you’re quickly back into it. For international players playing abroad, the time off is slightly less. I like playing here in France and I’d rather sacrifice those three weeks off a year to play here. That’s up to me. I can’t really complain because it’s my choice to be here. If I wanted extra time off I could just go back home and get it.’

Rather than return to Paris for Racing’s league game against Biarritz, Russell spent the weekend back in Scotland, watching his brother play for Sterling against Ayr. It was a throwback to his amateur days, when his day job was as a stonemason. 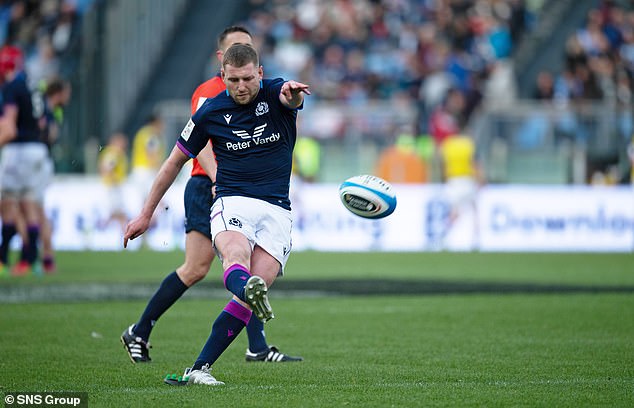 Headlines have branded him a liability, forgetting his magical moments that light up games 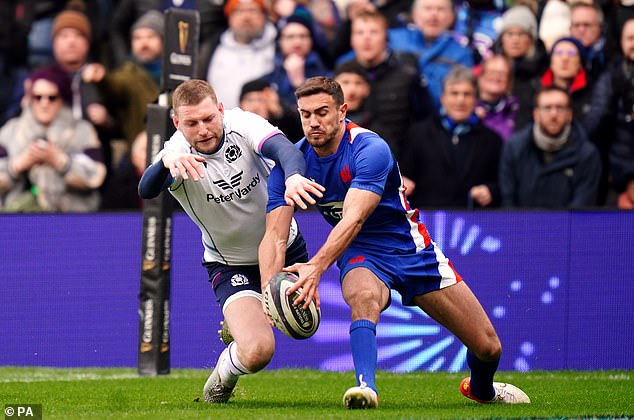 Russell has conceded that, as a 10, he may get left with the slack if his side falls to a defeat

‘When I played at Ayr we wanted to win but we were playing with our mates for a hobby also,’ he says. ‘When it becomes professional it becomes a job quite quickly. I’m not saying it’s not fun out on the pitch but there’s more pressure, I suppose. If you’ve completely messed something up then you’ve got a boss that’ll have a go at you.

‘Being a 10, if the team lose then you get left with the slack. When you’re good you get all the praise, and when a couple of things don’t come off the blame falls. It’s highs and lows. There will always be certain players who get more praise and folk having a go at them. The media and the fans will have their say. That’s just how it is. It shows the sport’s growing, I guess. It’s up to us as players how we deal with it and how we keep performing.’

Some headlines branded Russell a liability; quickly forgetting the moments of magic that light up a game. His have-a-go attitude was picked apart and the criticism started to get into his head. There were moments when the play-maker even began to question his thought process on the pitch.

‘If something doesn’t come off, all of sudden you’re a risk-taker, a this, a that,’ he says. ‘It’s one thing Vern Cotter used to say as Scotland coach: “I don’t care what you try as long as you have a reason behind it”. That’s how I play. Because I’ve got a reason behind it. 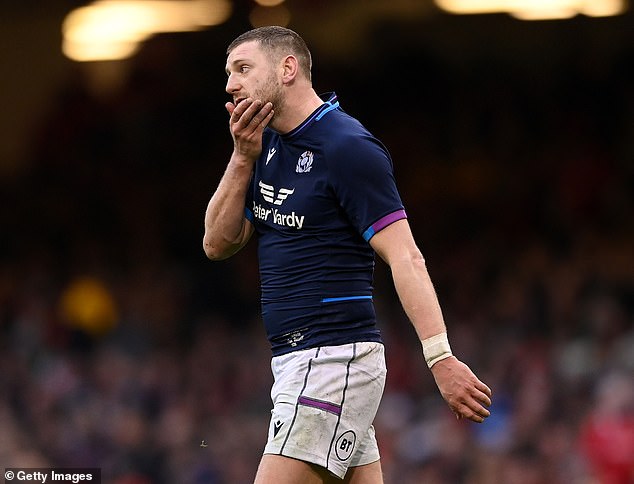 But despite the criticism, the Scotland man has vowed to keep taking risks while on the field 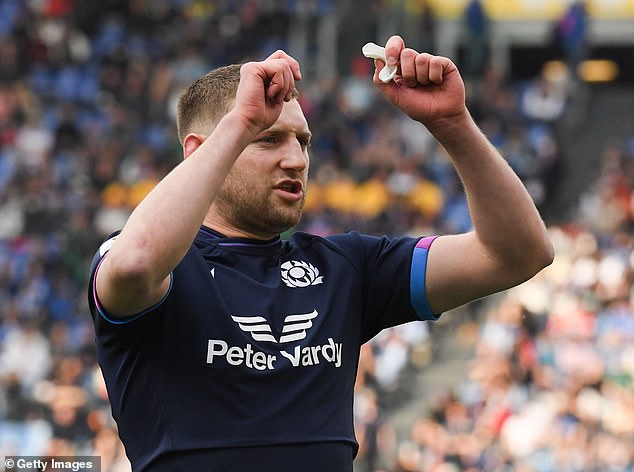 He is back on the conveyor belt again and, ahead of facing Sale, thrives on the big game days

‘You do sometimes think “What’s the point in even trying it?” as if I don’t put it on the money, and if we don’t score off it then in the media the next day it’ll be “That’s one of Finn’s 1/10s that come off” and if it does it’ll be “That’s the brilliance of Finn”.

‘I’ll still try it, obviously. OK, if it’s an 80-20 kind of risk I might not, but it’s down to the players you’re with and the coaches. If they’re giving boys the confidence to look for these things then they’ll try it. Those things are in the back of your mind. I know Gregor Townsend has said I should go off social media and shouldn’t look at things but nowadays your mates send you everything and it’s impossible not to see things.’

After some time out, Russell is ready to go again. He is back on rugby’s conveyor belt, which will continue to squeeze its players as salary caps are reduced around the continent. He thrives on big game days and, in the semi-final against Sale, the smiling assassin will be back in business.

‘Whenever I play, I’ll always be smiling and trying things,’ he says. ‘This weekend’s match is knockout rugby so you strategically might play things slightly differently, but there will still be a smile on my face.’ 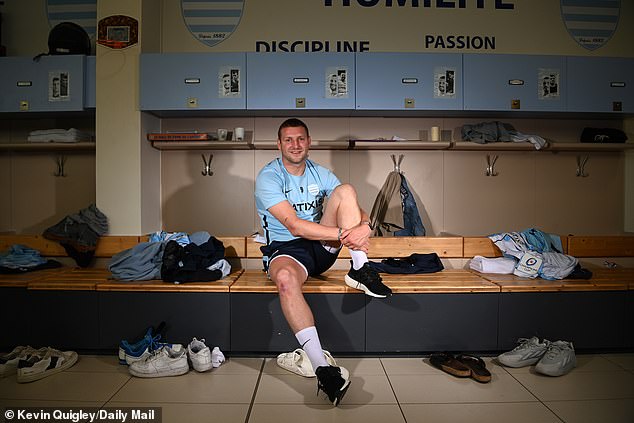