Harlequins 28-24 Gloucester: Quins fight back to secure place in the Premiership semi-finals

Harlequins 28-24 Gloucester: Quins fight back to secure place in the Premiership semi-finals


Harlequins 28-24 Gloucester: Joe Marchant scores twice as Quins stage another thrilling fightback to secure a place in the Premiership semi-finals

By Nik Simon For The Mail On Sunday

There was a Craig David takeover at Twickenham. Music’s comeback king serenaded rugby’s comeback kings, as Quins overturned a 17-point deficit to book their place in the play-offs.

For Gloucester, the party looks to be all but over. They must work on their second-half discipline on Monday. Hope for positive injury news on Tuesday. Pray for a rugby miracle on Wednesday — and Thursday and Friday and Saturday — or their campaign will be over in a fortnight.

The Cherry and Whites’ fate is out of their hands. They must beat Saracens on the final day and hope that results elsewhere go their way. Whatever slim odds they had of making the play-offs were slashed by the brilliance of Joe Marchant, who scored twice in the trademark Quins fightback.

‘One of the things I thought about was how we deal with the occasion,’ said Gloucester coach George Skivington. ‘A few of our lads haven’t even seen Twickenham stadium, let alone played here. Craig David, the fireworks, everything that was going on. Maybe there was a big-stage factor in the second half. But I’m really proud of them. I’m not going to cry myself home.’

After 40 minutes, Gloucester looked unstoppable. They dominated the collisions, controlled the field and picked holes in the Harlequins defence with their passing game. No 8 Ben Morgan scored their first try after 13 minutes, piling over from the back of a driving lineout.

At times, they were seduced by how easy it was. Ruan Ackermann threw a wild offload in his own 22, which was intercepted by Danny Care, for Alex Dombrandt to briefly level the score. 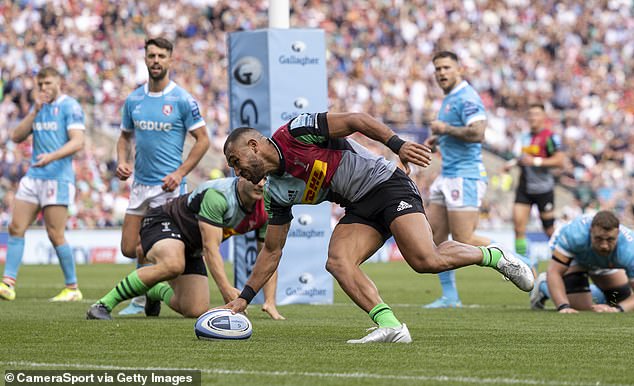 Marchant went over twice after the break, before Cadan Murley sealed victory late on

But Gloucester continued to power ahead. They ran smart angles, with Charlie Chapman and Santiago Carreras linking up in the build-up to Freddie Clarke’s try. Rattled, Quins conceded penalties that Gloucester used as a lineout platform. Chris Harris ran a support line off the shoulder of Lewis Ludlow for their third try, before Adam Hastings kicked a penalty to put his side 24-7 up after just 34 minutes.

At that point, Gloucester suddenly flicked into freefall mode. Harris and Morgan both left the field with injuries and Quins finally began to click. Suddenly it was Gloucester conceding all the penalties and dropping all of the balls.

Marchant’s fingerprints were all over Quins’ resurgence. He made powerful tackles, stole restarts and touched down Danny Care’s grubber to kick-start the comeback. Marchant then scored his second down the left wing. 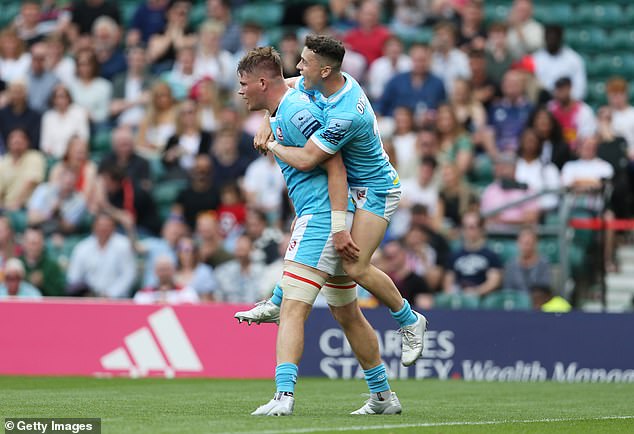 ‘Joe was phenomenal again,’ said Quins coach Tabai Matson. ‘Man of the match. For us, he’s just such a reliable Quins man. He’s one of the best. He’s so versatile and often those guys get moved around, but he can be a world-class centre, play wing, play full-back. That’s underpinned by his work ethic.

‘One of the things I love about this team is if there’s time on the clock they believe they can score. At half-time we talked about discipline, put a plan in place and it paid dividends.’

In the closing stages, Gloucester looked spent. Sniffing victory, Harlequins turned up the pressure. Care won a controversial turnover and, seconds later, Louis Rees-Zammit was sent to the sin-bin for a deliberate knock-on.

With an extra man, the winning try felt inevitable. Turning down a shot at goal for the draw, Marcus Smith kicked to the corner. With waves of battering carries, they stretched Gloucester’s defensive line until it snapped. Cadan Murley scored on the right wing and, to quote Craig David, Quins were walking away with the win.