By Nik Simon For The Mail On Sunday

The death stare told a thousand words. Ellis Genge marched into the press room after full-time and gave a look of daggers as he was asked about Leicester’s gallant defeat.

It showed how standards have changed at Welford Road. They took no pride in defeat; not even by a Leinster team boasting 12 of Ireland’s starting XV that beat the All Blacks in November.

Asked if it was hard to compete against a team loaded full of internationals, Genge bristled: ‘Look mate, I’m not trying to be a p**** here but I don’t want you saying that. We came out there and we fought as hard as we could. They have 13 internationals but don’t put us in that bracket of we gave it a good crack. 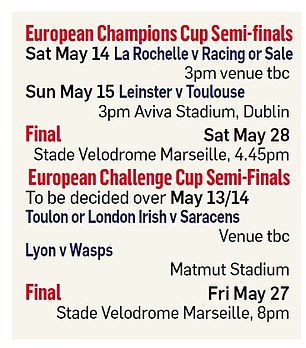 ‘We could have won that game. I think you know that as well. If anyone is going to say that to me, please don’t because it is going to wind me right up. Our boys fought all game so I am not going to come here for someone to say we gave it a good crack and we’re plucky losers. I am not having a pop but I am just saying please don’t say that to me.’

This was Genge’s last shot at European glory with Leicester. They will miss his passion when he leaves the club for Bristol at the end of the season. And for the remainder of his time in the East Midlands they will rue their failure to fire a shot in the first half.

While the Tigers are on a crusade in the Premiership, the first 40 minutes was a reality check of what it takes to reach the pinnacle of the European competition.

Leading 20-0 by the break, Leinster’s 36-year-old fly-half Johnny Sexton may as well have set off on a Saga cruise liner back to Dublin. This was a Leinster team worthy of international honours. The new-found hope around Welford Road was quickly crushed — and Sexton turned down the volume when he kicked the opening penalty after three minutes. 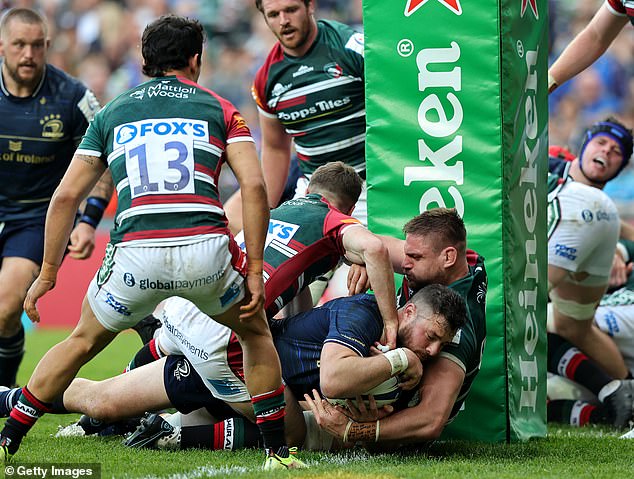 While George Ford’s spiral bombs have become a trademark of the Leicester revival under Steve Borthwick, here they blew up in the No10’s face. Leinster’s back three claimed them with ease, diffusing the threat and launching counter attacks through a shredded defensive line.

Irish scrum-half Jamison Gibson-Park was alive to opportunities around the ruck, knitting together Leinster’s phase play, with tries from Josh van der Flier and Robbie Henshaw taking the points tally to 20.

‘I was offside, we got pinged twice at the scrum, we lost three lineouts,’ said Genge.

‘Not a lot went our way. We missed a lot of opportunities and conceded a lot of silly penalties, like me not retreating ten and they scored straight after. That’s what the game is about isn’t it? Basics. I think everyone has learnt that in the last 18 months. We were 20-0 down in a quarter-final against Leinster at home. If you can’t get up for that you’re probably in the wrong business. 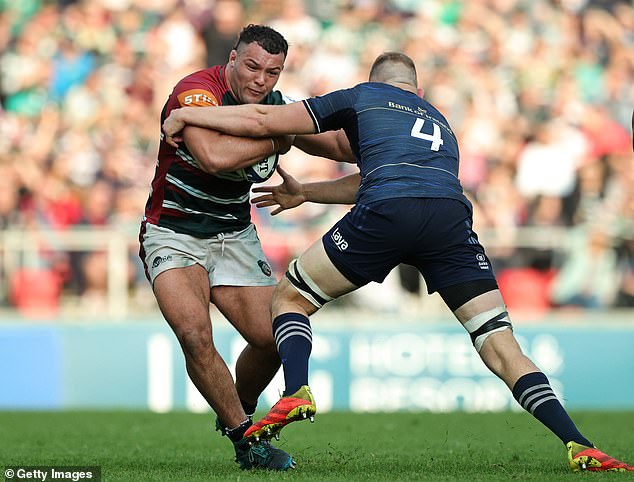 Minutes into the second half, the volume cranked back up. Leicester kicked for the corner after winning a penalty at the scrum, before play moved from right to left. A couple of big carries later, Ford threw a long pass and Chris Ashton dived over on the left wing to restore some hope. A second try did not seem far away. Nadolo was held up over the Leinster line and Julian Montoya watched his lineout stolen, as the hosts threatened.

Yet they failed to capitalise on their spell of territory, with Leinster’s defence holding strong, before pouncing on a loose ball to transition into attack. Van der Flier charged down Potter’s kick in the Leicester 22 and it took some scrambling cover from Jasper Wiese to stop Caelen Doris from scoring a third. In the end, Leinster settled for three points from the boot of Ross Byrne.

By the time Leicester’s second try came, it was too late. As recently as last season, this Tigers team may well have folded. Nic Dolly scored a consolation try in the final minute.

‘Pack it in,’ Genge bristled, when asked about where the result sits in the club’s rebuilding project. ‘Don’t start that. It is not a genuine question. It is not a rebuilding journey. We went out there in the second half and won 14-3. You are talking like we were blown away.’