Local weather change: Round financial system should be intentional – Skilled

by afconp
in Space, Technology
0

Omnispace Spark-1, launched in April 2022, and Omnispace Spark-2 will now be used to advance and validate the development and implementation of Omnispace’s global non-terrestrial network (NTN). As prime contractor, Thales Alenia Space designed and built the Omnispace Spark satellites with the help of industry partners: NanoAvionics, ANYWAVES, and Syrlinks. Omnispace Spark-2 was delivered into orbit by Exolaunch aboard a SpaceX Transporter mission.

“Thales Alenia Space, along with this incredible team of innovators were instrumental in making Omnispace Spark possible and we are thankful for their expertise and execution. With deployment of the Omnispace Spark program now complete, we look forward to testing, and to advancing on the delivery of the first global, mobile network with direct-to-device connectivity from our satellites in space,” said Ram Viswanathan, president and CEO of Omnispace LLC.

“The success of the Omnispace Spark program is due to an impressive team effort between Thales Alenia Space and innovative startups,” said Herve Derrey, president and CEO of Thales Alenia Space. “We’re very proud to support Omnispace in the deployment of the first global 5G network via satellite, which will open the door for new opportunities for mobile network operators, industry and end-users.”

“Being part of the Omnispace Spark Program and working closely with all companies involved has been a tremendous experience, crowned by the two successful launches,” said Vytenis J. Buzas, founder and CEO of NanoAvionics. “NanoAvioncis’s strong relationship with prime contractor Thales Alenia Space allowed us to bring our modular and cost effective nanosatellite buses to the project as well as launch support and in-orbit operations.”

“The launch of Omnispace Spark-2 marks the next step in building the universal 5G network desired by Omnispace. Our payload antennas will be used to enable a direct connection, no matter where in the world the user is, meeting our commitment to enable disruptive technologies for the benefit of all humanity,” said Nicolas Capet, ANYWAVES CEO.

“At Syrlinks all the team follows with a great interest the successive launches of the Omnispace Spark satellites, onboarding Syrlinks Radiofrequency payload solution. For such IoT (Internet Of Things) satellite service, any additional satellite placed in orbit is key to enlarge this innovative service coverage and penetration. It’s a new step toward the final objective of having a multiple-satellite constellation,” said Eric Pinson, director of Space activity at Syrlinks.

The latest information about the Commercial Satellite Industry 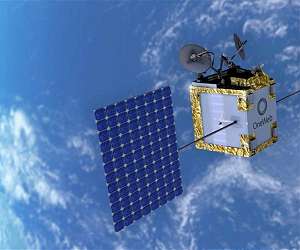 
The world’s first mission to remove several small telecommunications satellites from orbit once they reach the end of their operational service is about to start building and testing its prototype spacecraft.

Local weather change: Round financial system should be intentional – Skilled