Fintech holds the important thing to Africa’s financial prosperity, Nigeria should proceed to paved the way

By Nik Simon for the Daily Mail

On one side of the wall at the Stade Felix Mayol, Toulon’s players were singing away to celebrate their return to the big time. On the other side, separated by a few inches of concrete, Mark McCall was being peppered with questions about the English collapse in Europe.

The microphones could barely pick up his softly spoken answers as he was pressed about the decline in fortunes. Tries from Gabin Villiere and Jiuta Wainiqolo secured a famous French victory, 25-16, and eliminated the last English challenger.

Premiership clubs won the Champions Cup four times between 2016 and 2020 but this time around, for the first time since 2013, there will be no Premiership representative in either the Champions or Challenge Cup final.

Asked if reducing the salary cap to £5million had knocked the competitiveness of English clubs, McCall admitted: ‘Logically, that could be right.’ Cash is king in rugby and, over the last two years, there has been a gradual drip-feed of players from the Premiership to the Top 14.

Hooker Christian Tolofua was once a squad player for Saracens, but on Saturday night he was at the heart of Toulon’s dominant lineout. Earlier in the day, Saracens academy graduate Joel Kpoku was named man of the match in Lyon’s 20-18 victory over Wasps.

Further afield, Will Skelton, Thibaud Flament and Zach Mercer have all moved across the Channel to seek their fortune. More A-listers are heading for the exit this summer — fuelled by a dispute over agent fees and attempts to balance the books. 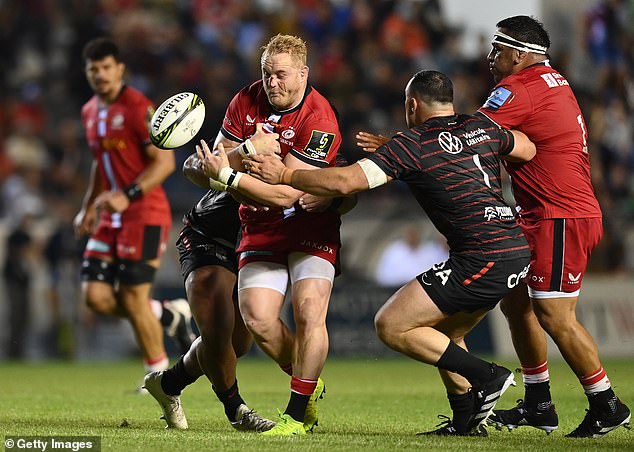 Premiership squads have become thinner, but there is more to the equation than a seven-figure shortfall in playing budgets. In England, the second division is suffering a worrying decline. There is little interest or investment and, as a result, fewer players are breaking through from the Championship.

In contrast, France’s second tier is thriving. Their fixtures are broadcast on national television every Friday night, all chasing promotion to the top flight, providing a shop window for future stars.

La Rochelle squeezed past Racing 92 in a tense all-French affair in Lens yesterday to reach their second straight Champions Cup final, where they will meet Leinster.

New Zealander Ihaia West redeemed himself after missing three kicks off the tee by scoring a late try to end Racing’s resistance.

La Rochelle were unable to take advantage of Racing being reduced to 13 for eight minutes after the break as Cedate Gomes Sa joined Camille Chat in the bin.

Le Garrec missed two shots on goal before West shrugged off his earlier errors to touch down in the final minute.

Four of Toulon’s starting backline began their career in the second division. Three years ago, Villiere was playing for Rouen. On Saturday, he confirmed his status as one of the world’s best finishers, backing up his performances for France with two tries for Toulon.

In France and Ireland alike, they are reaping the rewards of closer collaboration between club and country. For years, the likes of Leinster have resisted the urge to hold back young Irish players in favour of big-ticket overseas stars.

In the Top 14, tightened quotas were introduced to ensure that young French players are given regular first-team action. They even played the national anthem before kick-off at the Stade Mayol, although they can still afford a sprinkle of foreign stardust.

‘There are good teams in France, with a lot of young French players playing in most teams,’ said Toulon’s Italian No 8 Sergio Parisse. ‘The Top 14 is really close, you have eight or nine teams who can qualify for the top six.

‘The French Under 20s have been winning World Cups and France have won the Six Nations. England struggled in the Six Nations. Of course, it’s disappointing from an English point of view that they don’t have teams in the finals.’

Saracens return to domestic competition with plenty to work on after Saturday night’s implosion, but McCall is resolute that their decline on the European stage is not terminal.

‘I’ve listened to and read some of the speculation,’ he said. ‘I’ve heard this before. Back in the day, it was because English players were playing too often, but then English clubs started winning.

‘Then it was because Irish players didn’t play enough. I think it’s dangerous to jump to conclusions. I think we probably need to see what happens next year and the year after.’